Last time I talked to you about what it’s like being in The Spin Cycle.

This week I want to share with you the UNKNOWN.

I used to be so dang scared of the unknown.  I would do anything to get away from it, change it, fix it, control it.  Do you know what I am talking about?

It’s that place where you have “leaped” – “stepped” – “ran” to a new place in your life.  Some call it being in limbo.  I have called it “limbo land” and also the UNKNOWN.  A few months ago I wrote about walking on the tightrope.  The rope you walk when you decide the place you are in just isn’t going to work anymore.  I mean REALLY isn’t going to work and you MUST move somewhere, anywhere different.  So you take the step.  The step to get on the tightrope and walk across to “what”.  The leap, the leap to “what”? 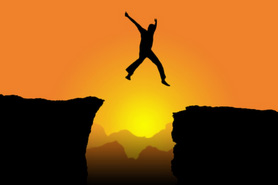 You aren’t quite sure what it is.  You may have a vision, a picture, an idea, a feeling.  You are not sure you can get there, sustain being there or even deserve to want to be there.

And, the truth is that in the process of going from one place to the other there can be a time when we are living in the “UNKNOWN”.  A place with no apparent answers, certainly not the vision or the feeling we thought.  And it can be there even if we are in the NEW spot.  The unknown, a place we have never been, a place that may feel so uncomfortable you are beginning to have thoughts of running back to the place you were.

I have a friend who is going through this very thing right now.  Her name is Samantha (Sam).  She has been yearning for a life full of peace, quiet, choices that are focused on what she wants, a life based on her first.  She has gone through hell and back; recovery, broken and shattered relationships, chaos with her kids, and jobs lost.

Sam would move every time she had that feeling rise up in her that she wanted a different life, every time the chaos would become overwhelming and she just couldn’t stand it anymore.  I have watched this “flip-flop” for about ten years now.

She would run to what she thought was a better choice, a man, her kids, a job, and all of them felt like she was running from not running to something.  For me, I have felt she was actually running from herself.

Sam has worked so so hard to make the “right” choices.  Do what she thought was going to be “the answer”.  The problem with ALL of this is that Sam was looking for something OUTSIDE of her to be the answer.  So each time she would go to the next choice it never felt quite right and actually the chaos just stayed with her and then felt like even more.

The other day she made a BOLD move.  Instead of running away from something she decided to run towards herself.  This time she didn’t RUN, she choose HERSELF.  It was clearly different.  And as she took each step she began to have feelings.  Feelings that surprised her.  Feelings of sadness, grief and uncertainty.  They were a bit shocking and we talked.
I began to talk about the unknown.  That she was in a new place and didn’t actually know how to act, how to think, how to even breathe at some moments because the silence, the lack of chaos was overwhelming.  This is the UNKNOWN.  You keep looking for all of the things outside of you to fix you and this negative feeling go away and here you are and you are having all these feelings.  No one prepares you for this.

This is what I want to share with you.  I have been here as well.  It feels so dang awkward.  So uncomfortable at times you think you are going to crawl out of your skin.  This is the moment, the time, when you have to go INSIDE of you.

This is where the real practicing begins.  The practice of choosing YOU, of going IN, of practicing that there is NO answer outside of you.  Its all inside of YOU.

You will learn how to navigate this new brave world.  The one you ran to, leaped to, took one step at a time to, you will.  I promise.  The key is to know that you will be in a void for while.  That even now, that you have taken steps toward what you truly want, its going to take some time.  You will live in the UNKNOWN for a bit.  Some longer than others.  Its not a contest or a sprint.

It’s your life and the new task is to BE and not DO here.

Let me say this again.  It’s your job now to BE, not DO.   It’s the doing, the running, to and fro that has been allowing you to not focus on YOU.

So how will you BE?  How will you live in the UNKNOWN?  What can you practice?

2. Acknowledge that you are in the UNKNOWN.

Its amazing how much relief that this can give you.

Know and say often to yourself that this is step by step, choice by choice.

Reach out for help from people who support your choices to make the moves in your life that are for you and not towards the chaos.  We tend to isolate or ignore people who can help us when we make changes thinking that we are judged or judging ourselves harshly.  Reach out and get support.

I would love to know where in your life have you leaped?  When have you taken the step and been in the unknown?  Comment below and let me know.  Did you go back to the prior situation?  How many times before you made it THROUGH the unknown.  For me it took several times, just like Same.

LET ME KNOW BELOW your thoughts, ideas, comments. I love to hear from you.