Last Wednesday was the 50th anniversary of the March on Washington, DC and Martin Luther King, Jr’s infamous speech.

One thing you may not know about me is that MLK Jr was one of my HEROES.  And when I say Hero, I mean Hero. I had his picture in my room. 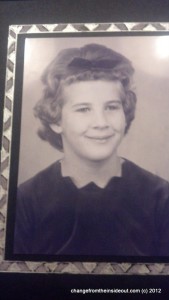 Yes, I was 7 and I had his picture in my room (JFK’s too but that is a different story).

I sat and listened to him when I could.  I poured over the LIFE Magazines if they had anything to do with him.  There was something about his pictures that made me not want to take my eyes off of him.   If I could have been a little bird and followed him around I would have chosen that in a nano second.

If you had asked me what I liked about him, why I adored him, what it was about him?  I would answer that I thought he wanted peace and fairness for ALL people.  At the tender age of 7 I didn’t truly know what racism was.  Honestly, I didn’t understand it all.  We talked about it some in my home growing up.  My parents taught us to be open minded and tolerant.  We were not faced with racism much in Coos Bay, Oregon in the mid 50’s. In one way that left me feeling somehow like it wasn’t “REAL” however in my heart I knew something was really wrong and that people were being treated unfairly. That they were not truly “free.”Those were the beginning seeds of “knowing” my heart belonged to freedom, topeace, to equality. 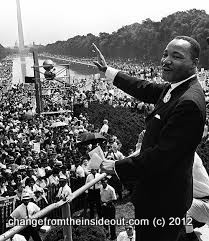 As my life has taken the paths, journeys, pitfalls and dead-ends it has, I realize now how MUCH this man influenced me, is a kindred spirit, and destined to be apart of my life, my entire life.  I now know that his mission is so similar to mine.

He said:
“I have a dream this afternoon that my four little children will not come up in the same young days that I came up within, but they will be judged on the basis of the content of their character, not the color of their skin.”

“I have a dream today, that YOU will not continue on in the same way that I have come up, fighting the WAR WITHIN but that YOU will not beat yourself up comparing yourself to others or what you THINK you should do or be but on KNOWING you have cared for, loved and TRUSTED yourself on the journey.”

I have been exploring Stop The War Within™ and how intolerance plays a big role in maintaining that war within.   I have come to realize how MLK, Jr. set his intention on the non violent resistance and his dedication to the core of his beliefs.  The difference in our missions is the internal and external focus.

Let’s go back to intolerance.  MLK, Jr. created a line in the sand and said NO MORE.  He decided what was not ok and then made a stand FOR what he wanted.  He believed in this to the core of his being.  He was driven.  He had passion.  He was intolerant of the bigitory, the discrimination, the prejudice. And he didn’t choose the same behavior of the bigots he chose the non violent stand.

I know that I have been so judgemental of my actions, choices and just pure existance.  I know I have been intolerant of ME.  I have allowed myself to be abusive, abrasive, and VERY violent with myself in the tone, the words and the way in which I have treated myself and my body.

I am passionate, dedicated, committed and making a STAND.  A stand FOR YOU.  A stand that says NO MORE.  A stand that loves, supports, has boundaries and teaches with love and honesty that NO MORE DO YOU HAVE TO ACCEPT this behavior.

I have a dream…

My Dream is for you to know the how it feels inside and out to treat yourself day in and out with love, respect and trust.  NO MORE BEATING YOURSELF UP...

I have a dream…

What is your dream?

I would love to know.

Leave your comments below.