Why We Should Be Seriously Alarmed

I have noticed driving throughout our city, shopping in our stores and eating in our restaurants the ever increasing size of our children in this country. It makes me go back and think about when I was in school. And to be very honest I do not remember very many children that were overweight. I remember a couple, not many. Today it’s almost the norm. It makes me all the more motivated to lose my own weight, watch what my little one eats and remember the role model I am for him and the other kids in our network. It’s for these reasons I wrote this blog post.

In other words, a diet of whole foods such as broccoli and peaches will likely get you better test scores than one of soda and Twinkies. And be honest – which foods do you see more often in the lunchroom? There is also plenty of evidence linking improved academic performance to physical activity. Those adults who have a regular exercise routine ‘routinely’ report a greater sense of productivity in their work. Again, it only makes sense that the same would translate to our kids. Want to get those test scores up? Pay attention to what your kids eat, and how often they get the chance to move! 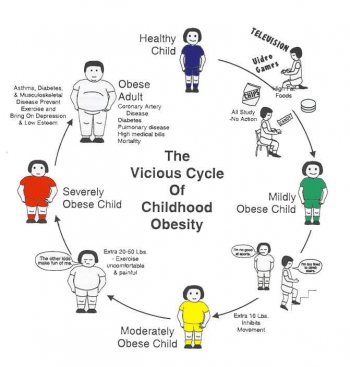 Why are we so concerned about test scores and ignoring our students life expectancy?

Why do we think it’s more important that they score a good grade on an end of year test than that they have clean arteries, fully functioning organs, and a body that won’t betray them?

If we already know that heart disease and type-2 diabetes shorten a person’s lifespan, why aren’t we springing into action as a nation when we realize that more and more children under the age of 10 are afflicted with these ‘adult’ conditions?

There is undeniable health risks involved with smoking, for instance. And we’ve made great strides in combatting that deadly habit. Yet our Standard American Diet is just as deadly, if not more so. We won’t let our children smoke, but we’ll let them drink Cokes all day long. A regular 16 ounce bottle of Coke has 194 calories and a whopping 54 grams of sugar, sweetened with high fructose corn syrup. Not an ounce of nutrition in the bottle. Think for a minute about what that does to our kid’s bodies, and it’s not hard to conclude they won’t live longer than us.

Most of our children do not eat healthy. Various studies and reports conclude that only 2% of children in the United States eat a diet along the guidelines given by the USDA. If this is the case, it can be safely assumed that the number of children who eat according to the more nutritionally sound ‘Eat Right America’ food pyramid (which focuses on whole vegetables and fruits, not grains, as the most important foundation of a healthy diet) is statistically too small to even calculate.

Which means that so few American children eat nutrient dense foods every day, we can’t even group enough of them together for a percentage point. This is a staggering number – or rather, lack thereof. Most of our kids don’t eat vegetables every day, never mind the recommended several servings.

Fast food is on the rise: It’s cheap, seems convenient, and to taste buds that don’t know the joys of eating whole, nourishing foods, it tastes great. But it not only lacks the necessary nutrients for growth and proper development, it actually contains an overload of ingredients that, over time, are deadly – grease, trans-fats, enriched white flour, processed meats, sugar, high fructose corn syrup, sodium – all slow poisons served in SuperSize portions. Morgan Spurlock’s famous documentary Super-Size Me really drives home the truth of what these unhealthy food products can do to a body that’s already grown. It’s frightening to think what it does to children. It’s become a dangerous staple of the Standard American Diet (SAD).

Diabetes is proliferating among our children, and half of all diabetic children are overweight: Remember when Type-2 Diabetes was called ‘adult onset diabetes’? Well, we can’t call it that anymore, because kids get it now, too. Why? Because of the junk they eat. According to The American Diabetes Association, the number of children diagnosed with type-2 diabetes DOUBLED between the years of 2005 and 2008. Let me say it again – the numbers in the US DOUBLED in THREE YEARS. If this doesn’t get our attention, I don’t know what will.

So what can we do about it? I stopped giving my little one any fast food. Just said NO. I was eating far too much of it and so was he. So instead of saying we will stop someday, we made that day November 17th, 2011. No more chicken nuggets, fast food burgers and fries and anything else that we know will harm us.

We started moving more as a family. Here is a great chart to help you. Today we made it an adventure and went to three different school playgrounds and walked the track, played on the equipment, made new friends and rode the scooter.

Do we eat things once in a while that are not 100% organic and absolutely nutrient dense, YES. I adhere to the 90/10 theory. 90% of our intake is nutrient dense food, 10% is not. It’s a choice. That is mine. What is yours? Let me know what your thoughts are. I am an adult that became obese and ate terribly. I am now unlearning all of those terrible habits. I have lost 35 lbs. since November. 83 lbs. lost since my heaviest. I am off all but one of my conventional meds. I used to spend $275.00 a month on medications. I now spend $35.00 a month. Our skin is clearer, our energy greater and our moods happier. REAL FOOD for HEALTH. I am working on Turning The Tide Of Health™ how about you?